How are you training for May 28th?

Our good friend Malcolm Jolley of Good Food Revolution has taken up running specifically to participate in our 6th annual run.

Training for the Terroir Run 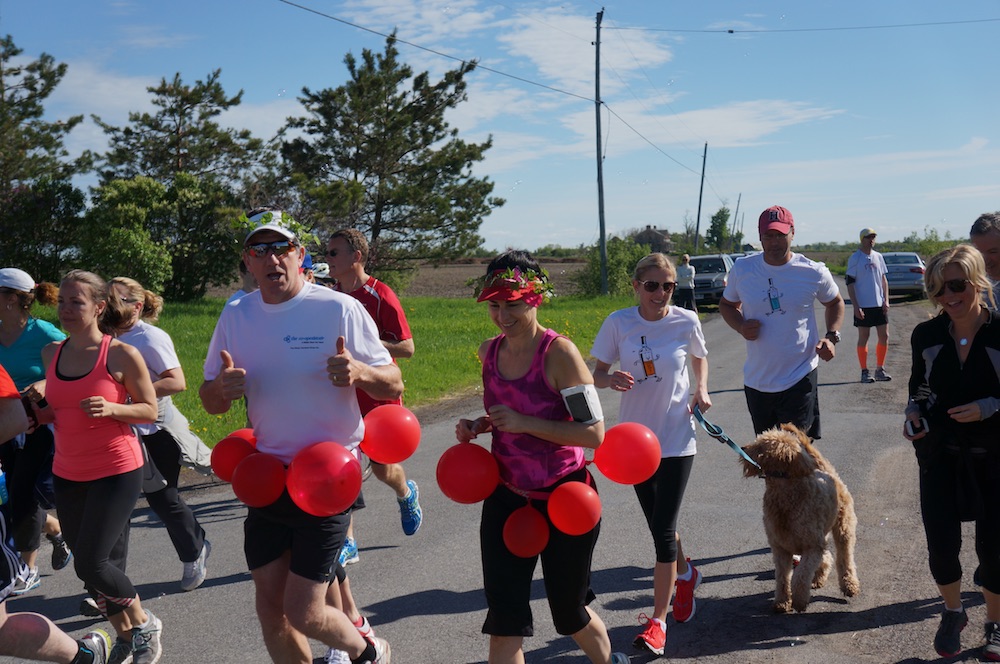 In my last post about my participation in the Terroir Run in Prince Edward County I wrote about my anxieties concerning running my first 10km event. After another week of training, I feel much better about my ability to complete the course and I look forward to the physical challenge. I’m getting better at the running. What’s now worrying me is wine drinking part of the event. Of course participants in the Terroir Run are not obliged to drink the traditional bottle of wine during the race; it’s a family event, after all. But Andrew and Rebecca Mackenzie organized the Terroir Run along the principles of the French tradition of Les Courses des Vins. Theses wine fuelled races combine the fun of sport with the opportunity to taste new wines along the route of the course. To qualify as a Grand Maître de la Course the rules require participants to consume the equivalent of 750 ml of wine, sourced only from the wineries along the route, from five minutes before the starting gun to before crossing the finishing line. Not an easy task if one wishes to make the run in a respectable time.

There are competing theories on the origins of the French tradition of Les Courses des Vins. Some posit them in Roman times in Provence as a way of both cheering up and training gladiators before their blood sport. Others say it was originated in the Languedoc to celebrate the bloody suppression of the Cathar Heresy. Over the Maritime Alps in Piedmont there is a close tradition of running and wine just after the harvest that is said to be tied to the celebration of the Roman Goddess Ceres and then adapted to Lombard Christian ritual as a way to celebrate victories against Saracen (Muslim) invaders who were forbidden to drink wine. Another wine and running ritual exists in the Catalan region of Spain, its original purpose obscured by the mists of time, though there is speculation that it came from New World traditions in South America, where runners would stimulate themselves with cocoa leaves.

Whatever and wherever running with wine takes its ancient origins, the Courses des Vins really hit its stride in the 1920-30s in France. As Rod Phillips writes in Alcohol: A History, during that time the French government was desperate to encourage wine domestic drinking after the disaster of American Prohibition. In 1926 there were regional trials that culminated in a Championship race not far from Bordeaux in Bergerac. The Bordelaise won, placing both in first and third place (a Champagneoise claimed second). This still holds as a controversy in France as it was thought the Bordelaise had a secret weapon they put to use on the 7th kilometre: Sauternes!

Anyway, there are number of strategies runners can take, such as waiting until being right at the finish line to drink an entire bottle in one go (risky). But most opt for a sip and go approach, taking advantage of the winemakers who line the route offering runners small cups of wine as they proceed and monitoring consumption to ensure each runner drinks at least a bottle’s worth. It sounds ridiculous, but until there were reliable sources of fresh drinking water, wine was often used as a way of hydrating the body during physical stress, not least at the time of the grape harvest. The trouble with bringing this model to the 21st century is that it’s hard to train for. So far, I have drunk a small glass of white wine before heading to the gym and treadmill. At the gym, more wine can be concealed in a water bottle (I’m not sure of my gym’s policy on alcohol, and am too embarrassed to ask), but drinking it while running without spilling some and releasing bouquet has proved difficult. As the weather improves and I move my training to the outdoors I will use a camel back and should be ok. For the sake of road safety, I shall have to run on a nearby track.

Right now I have been sticking to rather lean Prince Edward County Chardonnays from Norman Hardie, Rosehall Run and The Grange of Prince Edward. At some point I am going to have try a bigger bodied wine from Closson Chase, and then start varying into Pinot Noir. (Actually, Closson Chase has a Pinot Blanc that I bet might be the perfect wine to run on, I’ll have to get my hands on some.) There are also the lovely County Cider Co. ciders and beers from County Road Beer Co. that are part of the run (see all the participating producers here), which should come handy for refreshment, but don’t technically count towards the “bottle”.

Stay tuned for more notes on my training…